With booking business/first class during business summer months, especially using BA Companion Certificate for redemption, I’ve learned you’ve got to book this type of trip out at least 9-12 months. For me it was about 12 months to make sure I got the dates I needed.

We booked British Airways Club World (business) seats roundtrip from/to DFW (Dallas Fort Worth) to FRA (Frankfurt). Here is a screenshot of the retail price ($17464.04) for these segments: 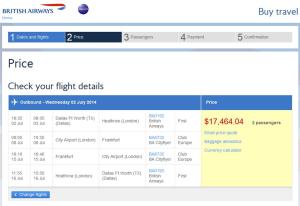 We were excited to return to the British Airways 747 configuration with business class seats on the upper deck. While the seats are not as big BA First Class, or service as attentive, nothing I’ve ever flown compares to the “private plane” style of flying like BA’s upper deck does in business on their 747’s. We do truly love the quietness of the upper deck away from everyone else. And I do enjoy BA’s business class seats compared to United and other domestic carriers – much more private. 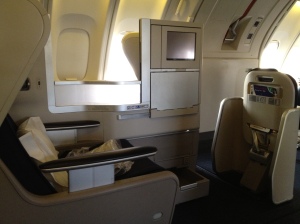 I opted for the Flounder, which was pretty good: 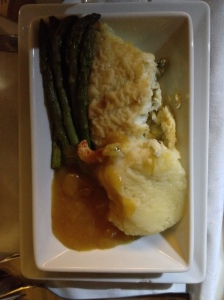 Other than the flight attendant keeping the lights on ALL flight so no one could get some sleep, and the service spotty given there are only 20 of us to server, the flight was fairly uneventful. We did get delayed flying into Heathrow, so got some good pictures of flying over London…